July 24, 2018
2018EACC News
Mr. Richard Tibbels, Head of Division for U.S. & Canada of the European External Action Service (the EU’s diplomatic service) visited Cincinnati July 18-20, following on the successful visit of EU Ambassador to the U.S. David O’Sullivan in May.  Tibbels had been in Washington for three days of meetings earlier in the week to discuss trade and other issues, and had asked the team at the EU Delegation to arrange for him to visit “the real America” so he could learn how some of these issues are perceived outside “the Beltway.”  Tibbels was accompanied by Ms. Despina Manos, Special Advisor for Political, Security and Development issues at the EU Delegation to the U.S. in Washington, DC.
The first event on the agenda was a breakfast Thursday, July 19, with members of the Board of Directors of the European American Chamber of Commerce of Greater Cincinnati (and other EACC members), which organized the visit.  Ben Taylor, Director for the Great Lakes Region for the US Chamber of Commerce, was also at the table.  After introductions, Tibbels recited the statistics outlining the overwhelming importance of the EU-US relationship, with 44 out of 50 states exporting more to the combined countries of the EU than to any other country and the hundreds of thousands of jobs supported in the US and the EU by trade and foreign direct investment.  Given this data, to see the EU branded as an ‘economic foe’ is puzzling, to say the least.  But while some businesses and industries are troubled, the consensus around the table was that the vast majority of Americans have not yet been adversely impacted by the new or proposed tariffs.  As a result, legislators have little incentive to push back against a President who remains largely popular with his base on an issue most Americans have evinced little interest in.
Tibbels was next able to visit the Siemens electric motor production plant in Norwood, where he learned about the 120 year history of manufacturing at the site.  The 360 employees there design and custom-build electric motors ranging from 20 to 20,000 horsepower to some of the industry’s most exacting standards.  And steel tariffs, particularly for the electrical steel that goes into the products, are already negatively impacting Siemens’ supply chains.

Guests at lunch included members of the local staff from the offices of the Kentucky and Ohio congressional delegations representing Senators Brown, McConnell, Paul, and Portman, and Representatives Chabot, Massie, and Wenstrup. (One guest noted that it took the EU and the EACC to bring them altogether).  The point of the session was to hear what constituents were saying about trade policy.  And the answer was – with the exception of a handful of businesses adversely affected by the moves – “not much.”  Indeed, to the positive  there are examples like Nucor Steel (in Gallatin, KY, just downriver from Cincinnati) which is spending $176 million to expand operations (and creating 75 full time jobs in the process).  One attendee said that most of the calls they’ve gotten recently have been about immigration and family separation issues.  Most acknowledged they did not anticipate trade being a significant factor in the upcoming mid-term elections unless the economic impacts quickly became more obvious.

There followed a visit to the University of Cincinnati’s brand-new 1819 Innovation Hub where Tibbels learned about the breadth and depth of the regions resources to support innovation in the water technology sector, including the ‘Confluence’ Water Technology cluster, and the ‘Pipeline H2O’ business accelerator (including hearing from several graduates of the program, two of whom are setting up shop in Cincinnati).
The final event of the day was a dinner in Northern Kentucky where comments largely paralleled the morning’s breakfast, but the guest list included mostly Kentucky companies and organizations (including the Cincinnati/Northern Kentucky International Airport).  And many of the conclusions were similar – a handful of local businesses are facing severe consequences because of the tariffs; most businesses are at least aware of the potential of negative impacts (but are not seeing them yet); and most residents are either indifferent or slightly positive.
At the end of the evening, Tibbels said that he was carrying three points home to Brussels: 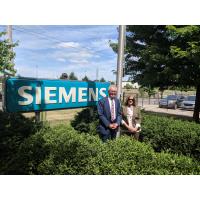