EACC Behind the Scenes: EU Ambassador to the U.S. Addresses Transatlantic Trade During Visit to Greater Cincinnati

When European Union Ambassador to the United States, David O’Sullivan, was in Cincinnati last week, he delivered a message of gratitude for the sacrifices of blood and treasure America has made over the decades to make the European experiment feasible.  He delivered a message of esteem for the welcome European business receives in our region and how that contributes to our collective economic vibrancy.  And he delivered a message of concern that a unilateral U.S. international trade policy is putting unnecessary strain on what is, both for the U.S. and Europe, our most important political, security, and economic relationship.

Speaking to nearly three hundred guests at the Annual Gala of the European American Chamber of Commerce, Ambassador O’Sullivan said that Europeans have built, with America’s support and friendship, a European Union that stands as a beacon of freedom and democracy; that is an engine for global economic growth; and that is one of the most open trading blocs in the history of the world.  And the U.S.-EU economic relationship is massive, balanced, and mutually beneficial:  seventy-eight percent of the total global foreign direct investment is between the U.S. and the EU, and forty-four out of fifty U.S. states export more to EU than they do to China.  Given these facts, European officials are mystified by comparisons of EU and Chinese trade policy.

O’Sullivan said that proposed U.S. tariffs on aluminum and steel are not just unfair to a European friends and allies, they threaten U.S. manufacturers who rely on these high-value products.  More importantly, the proposed tariffs are illegal under WTO rules, and if a compromise cannot be found, the EU will reciprocate to protect its interests.

Ambassador O’Sullivan has been deeply involved with the EU for over 30 years, and pointed out that the transatlantic partnership has survived past concerns about steel (and about climate and about Iran) because of our shared concerns for global security and are shared values of democracy and freedom.  We must stand together – in Brussels, in Washington, and here in Cincinnati – to promote and protect these values and to keep our partnership on the right path. 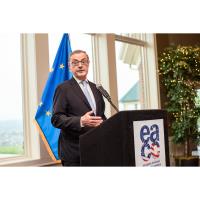