October 10, 2017
2017EACC News
EACC member the City of Blue Ash has developed a sister city relationship with Ilmenau, Germany in the state of Thuringia. Last week, I had the opportunity and honor to travel to Ilmeanu representing the EACC and as part of the Blue Ash Sister City Delegation.

The City of Ilmenau has approximately 30,000 inhabitants and is located at a height of 500m in the valley of Ilm, which runs through the town, and is surrounded by mountains and hills. Goethe first visited Ilmenau in 1776 and made a total of 26 visits, developing a love for the countryside in this region of Thuringia. One can still explore the 20km Goethe Trail from Ilmenau to Stützerbach, visiting places linked to Goethe’s work and life.
The City of Blue Ash took its first trip to Ilmenau in February 2000, while the first delegation from Ilmenau came to Blue Ash in May/early June of the same year.
This year’s delegation consisted of representatives from Blue Ash City Council, the City Administration, educational institutions, and the business community. Specifically, delegates included City of Blue Ash Mayor Lee Czerwonka; Christine Buttress, wife of Mayor Czerwonka and an attorney with Graydon Head; City of Blue Ash Economic Development Director (and EACC Board member) Neil Hensley; Nicholas Miller, Technical Director at Arku Coil Systems (an EACC member); Dustin Montgomery, Economic Development Specialist with HCDC; Debbie Page with the University of Cincinnati Blue Ash; Karla Plank, Administrative Assistant with the City of Blue Ash; Rob Ryan, City of Blue Ash Council Member; Marcallene Shockey, City of Blue Ash Volunteer; Harry Snyder, President of Great Oaks; Chris Theders, Assistant Fire Chief for the City of Blue Ash; David Waltz, Blue Ash City Manager; interpreters Sal and Bea Wertheim; John Wolfer with the University of Cincinnati Blue Ash; and Bradley Williams, K-12 S.T.E.A.M Supervisor and Engineering Instructor with Sycamore Schools.
Over the course of the week-long trip, the delegation had the chance to visit several local and regional educational institutions, businesses, and historical sites, while also meeting and connecting with members of the government of the City of Ilmeanu and residents.

In terms of educational institutions, we visited the Technische Universität Ilmenau, which is the only technical university in the state of Thuringia. The University offers future-oriented bachelor and master programs in engineering sciences, mathematics, and natural sciences, as well as business and social studies to its approximately 7,000 students. Specifically, our visit focused on the Automotive Engineering department. Additionally, we had the opportunity to tour the Handwerkskammer Erfurt (Training Centre of the Erfurt

Chamber of Crafts and Trades). Located in Erfurt, this institution offers a range of occupational training for skilled trades. Over 70,000 tradesmen and women have started or advanced their careers at the institution over the course of its roughly 20-year history. The Training Centre also has an international partnership program, training both Europeans from outside Germany and non-Europeans in occupational-educational and advanced technical training in the fields of motor vehicle technology, renewable energy, CNC technology and mechatronics.
At the start of the trip, the delegation also met with a group of high school students and teachers to discuss the similarities and differences between Germany and the U.S., particularly related to each country’s education system.
On the business front, we had the opportunity to tour two local companies. First, we visited QSIL, which is a producer of fused quartz products. The company has locations/productions facilities in Langewiesen, Germany (the company’s headquarters and where we visited) and in the Netherlands, in

addition to a sales office in Freemont, California. CFO Michael Keitz took us on a tour of the company’s German production facility sharing insight into the company’s products and technology. In addition to QSIL, we also visited Ziersch GmbH, which specializes in the development and distribution of high-precision surface grinding machines, profile grinding machines, portal grinding machines and rotary table grinding machines. We had the privilege of meeting with CEO Frank Ziersch, who took us on a tour of the company’s new building in Ilmenau and shared information about Ziersch’s range of products and its global reach across Europe and Asia.
The day concluded with a meeting at the Technologie- und Gründerzentrum Ilmenau (TGZ Ilmenau), where we met with local companies and start-ups, while also hearing from a representative from economic development agency the State Development Corporation of Thuringia – LEG. Blue Ash Economic Development Director Neil Hensley also had the opportunity to share information about the City of Blue Ash with attendees.
Our delegation had the chance to visit many historical sites including the Goethe Museum in Stützerbach and the Oberweissbach Mountain Railway, which first opened in 1922 and is the world’s steepest funicular line that uses standard gauge rail wagons. Toward the end of the trip our delegation also had the opportunity to visit the Deutsch-Deutsches Museum Mödlareuth. Like Berlin, the village of Mödlareuth became a symbol of the divided Germany with the Tannbach stream flowing through the village becoming the initial line of demarcation between East Mödlareuth in the Soviet occupied zone and West Mödlareuth in the U.S. occupied zone. When the two German states were founded in 1949, the Thuringian part of the village was East German territory, while the Bavarian part belonged to West Germany.
Moreover, our visit to Ilmenau also coincide with the holiday Tag der Deutschen Einheit (the Day of German Unity). During the evening of Monday October 2nd, the delegation attended a ceremony celebrating the Day of German Unity (on October 3rd). The commemorative event celebrating 27 years of German reunification included remarks from Gerd-Michael Seeber, Mayor of Ilmenau and Blue Ash Mayor Lee Czerwonka.

Toward the end of the week, we visited to the State Parliament of Thuringia in Erfurt, where we had the opportunity to speak with a member of parliament representing the CDU party. Given the recent federal elections in Germany, it was also quite interesting to learn more about the state government of Thuringia and to see the political campaign ads still hanging throughout both Erfurt and Ilmenau.
As I continue to reflect back on the week, I am deeply grateful, appreciative and thankful to the City of Blue Ash for the opportunity to be part of this remarkable delegation and for the opportunity to learn more about Ilmenau, while also sharing the story of the EACC. It was a memorable experience as we fostered new relationships between the two cities and nurtured existing relationships that have continued to develop over the years. I am also extremely thankful to the City of Ilmenau for their hospitality and warm welcome throughout the week.
- Dayna 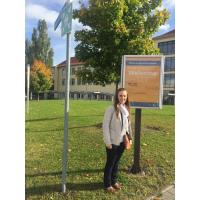