EACC Behind the Scenes - September 2017

Last week I had the opportunity to attend Discover Global Markets: U.S. Manufacturers to Europe and Beyond, organized by the U.S. Department of Commerce.  It was good to see a number of EACC members there, including Bannockburn Global Forex; Thompson Hine, General Electric, and of course Marcia Brandstadt of our own U.S. Department of Commerce Export Assistance Center here in Cincinnati.

The event followed four primary tracks with unique programming for each: Advanced Manufacturing, Automotive, Aerospace, and Export Tradecraft.  There were also a number of plenary sessions with excellent speakers.  I’ve tried to capture some of the key messages and themes from the event here.

Elizabeth Erin Walsh spoke at the opening session; she is the Assistant Secretary of Commerce for Global Markets and Director General of the U.S. and Foreign Commercial Service.  She noted that while this Administration is placing a strong emphasis on enforcing and strengthening international trade rules, she also said that the mission of supporting exporters and helping U.S. firms find new and expanded markets overseas remains at the core of the work of the Department of Commerce and the International Trade Administration.  A strong industrial base, supported by exports, is vital for our economic security and prosperity, she said, adding: “Economic security is national security.”  The opening session also included brief video addresses from Ohio Senators Sherrod Brown and Rob Portman.

Director General Walsh was followed by Sree Ramaswamy, a Partner at the McKinsey Global Institute.  His presentation, entitled “No Ordinary Disruption.”  The central point he made was that it is nearly impossible to comprehend the nature of the changes forthcoming in the next few decades not just in manufacturing, or even in the broader economy, but in the way we live our lives.  Drawing together threads from sensor technology and data collection to declining birthrates and an aging populace, he pointed out that companies which capitalize on these trends are already winning.  As evidence, he noted that the average age of an S&P 500 company is currently under 20 years, down from 60 years in the 1950s.

Jagannath Rao, Senior Vice President for Data Services in the Digital Factory Division at Siemens, continued the message as he talked about the “Industrial Internet of Things and the Future of Manfacturing.”  He noted that while “Big Data” is all the rage, most manufacturers aren’t even using “small data” to optimize their business.  He explained that digital technologies are already transforming businesses, connecting the conception and design phases through production, distribution, and even real-time use information in an iterative process.  But he cautioned that there is no one-size-fits-all solution, and that required not just sensors and computing power; it requires buy-in from front-line employees, and perhaps most importantly it requires a clear answer to the question “Why are we doing this?”

Christopher L. Mapes, Chairman, President and CEO of Lincoln Electric, presented at the Luncheon Plenary on the 19th.  He explained how his 122 year-old firm continued to grow and innovate in what many consider a “mature” industry (welding).  He explained some of the steps his company takes to protect its vital intellectual property, and the work they’ve done to expand training facilities to ensure employees and customers are constantly at the front of the market.  He also expressed pride in the firm’s history in Cleveland and as part of the Ohio industrial base.

On the 19th I also attended smaller panel discussions on Advanced Manufacturing (and learned about some interesting national initiatives to support the expansion of advanced manufacturing across the U.S.); a session on export tradecraft and supply chains (where I learned that there is direct container service from the Port of Cleveland to Antwerp!); and Aerospace (focused on helping firms understand the importance of protecting themselves from legal liability through research and planning on computer security and understanding export license requirement.  But the highlight of the day was a private reception at the Rock and Roll Hall of Fame, including a flyover by the Goodyear Blimp!

Day2 (October 20) opened with a presentation by Stephen Hooper, Senior Director of Manufacturing Strategy and Marketing for Autodesk.  He provided some specific examples of how technologies developed by Autodesk are not only changing elements of design, engineering, and production, but of the nature of work itself.  He pointed to a company building very high end performance vehicles that allowed designers and customers to customize cars at unimagined levels by digitally modeling performance characteristics.

This was followed by a session on Brexit, led by John Simmons, the Minster Counselor for Commerical Affairs at the U.S. Embassy in London.  He was joined on the stage by Mark Garnier, a British Member of Parliament and Minster for Investment in the U.K. Department of Trade; John Breidenstein, Minister Counselor for Commercial Affairs and Senior Commercial Officer for Europe at the U.S. Mission of the European Union; and Eugene Laney, Head of International Trade Affairs for DHL Express USA.  Garnier pointed out that while he fought vigorously for the “Remain” camp, now that the decision is make, the British government is committed to exit the EU in an orderly manner.  He asserted that despite predictions of disaster, the UK is creating jobs and attracting investment are record levels.  And he said that the UK is determined to enter into positive trade deals around the world, adding that “Governments don’t trade with governments; businesses trade with businesses.”  Despite Garnier’s optimism, the other panelists were somewhat cautious.  John Breidenstein noted that the U.S. has no stronger relationship than it has with the EU-28, and that position is unlikely to change when it is the EU-27 and the UK.  But he added that UK, US and European firms are all looking for more certainty in the post-Brexit business environment.  For his part, Eugene Laney said that a survey of DHL customers revealed that most SMEs expect Brexit to impact their business, but they are unsure what to expect, or how to prepare.  In response to a question about standards, Garnier said that EU and UK products standards will remain congruent after Brexit, but added that it will be important for the U.K to find ways to influence the development of new EU standards after Brexit.

Also on Day 2, I attended a session in the “Automotive” Track on selling into Global Automotive Supply Chains, where a representative from FCA US (Fiat-Chrysler) talked about best practices on connecting to OEMs (anything related to sensor technology and autonomous vehicles is very hot right now).  Another panelist (Brad Templeton, President of Roll-Rite) said that his success was taking what was seen as an aftermarket accessory in the U.S. market (tarps for open-bed trucks) and connecting to markets in Europe and Australia where such systems were integrated into the manufacturing process.

The final plenary session featured Dr. John Sankovic, Director of the Office of Technology Incubation and Innovation at the NASA John H. Glenn Research Center.  After talking about some of the remarkable research accomplishments done at the facility, he explained that NASA is now trying to do a better job of licensing patents and technology out for commercial use, because “as taxpayers, you paid for all this.”

All in all, it was a great event and opportunity to develop new contacts across the state, including with organizations like the Ohio Aerospace Institute, the Port of Cleveland, the Flanders Investment and Trade Office in Chicago, and others that will enrich our programming and activities here in Cincinnati and strengthen our efforts to promote stronger networking relations between the Cincinnati Tri-State Region and Europe. 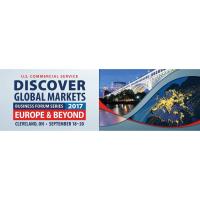