On June 21, 2019, the value of the European American Chamber of Commerce network grew exponentially with the formal launch of our newest chapter in the Netherlands.  I was honored to represent the Cincinnati chapter's Board and members at this historic event, which also included Jim Rosener (Board President) and Yvonne Bendinger-Rothschild (Executive Director) of the New York chapter.

On Thursday, June 20, Marcel Schulze, the new Executive Director of the Netherlands chapter, had organized a few meetings with representatives from the Netherlands Foreign Investment Agency and ‘NL In Business’ to discuss how we might become partners in promoting inbound and outbound investment (respectively) between the United States and the Netherlands.  We also had a dinner including Marcel, Yvonne, Jim, Myrthe Götzen, a partner at AKD (a law firm with offices in the Netherlands, Belgium and Luxembourg), who is the Board President for the new chapter.

The following day, after a final review of the organizational paperwork with the founding members of the new chapter, Yvonne and I both presented briefly on the organization and the activities of our chapters in New York and Cincinnati, with a particular focus on stimulating discussion within the new chapter about future program ideas as well as how we can cooperate among chapters to add value for our members.

Guillaume Martinez, President of the Paris chapter participated briefly by teleconference, congratulating all on this important accomplishment.  He noted that while our individual chapters can and must generate value through our local networks, the unique value proposition of this transatlantic network is our ability to connect across our network – from Cincinnati to the Carolinas to New York and Paris and Lyon, and now to the Netherlands.

Martinez also noted that the Paris chapter is entering a new chapter in its history, with the retirement of long-time Executive Director Claudine Serre at the end of the month.

After the formal signing of the foundation documents, there was a champagne toast and a delightful catered lunch.

My thanks to the Board of Directors for authorizing my travel for this important occasion; I look forward to working with Marcel and Myrthe, with my counterparts at all our chapters, and with all of our members here to support the continued growth of business and networking relations between the Cincinnati Tri-State region and Europe! 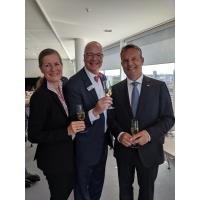