June 30, 2020
2020Member News
Long time friend and supporter of the EACC Filip Geeraert is retiring from his role as President & CEO of Deceuninck North America; we asked Anne Cappel and Joe Dehner to comment on Filip's role in building the organization.

By Anne Cappel
July 1st 2020, long time EACC member, past Board Member and Board President, Filip Geeraert is retiring from EACC member company Deceuninck. Since the first year of EACC Cincinnati in 2007, Filip has been an avid supporter of the EACC, passionately and enthusiastically embracing EACC’s mission of stimulating transatlantic business and economic development.

I first met Filip at the EACC/FACC gala dinner in 2007 and within a short time, Filip’s unbounded energy and vision for the EACC to accomplish great things propelled him from being a member, to a Board Member and by 2009 to being elected the third, but first European, EACC Board President.  As one of the Founders and a former Executive Director of the EACC Cincinnati, I had the pleasure and incredibly

Undeterred by the challenges of the Great Recession, Filip launched his presidency in January 2009 with great enthusiasm and the commitment to engage personally with each EACC member and attending every EACC event.  Filip’s approachability and magnetism drew record attendance and delivered the value members expected, securing financial stability for the EACC at a time when companies had to make difficult choices about funding outside organizations.

Filip always aimed high and rallied support using his favorite pep talk: “Failure is not an option”.  While the attempt to bring the first President of the European Council, and fellow Belgian, Herman Van Rompuy to Cincinnati did not quite work out, Filip convinced Belgian beer company InBev to make its first public speech on the fascinating, and somewhat controversial story of its 2008 acquisition of the Anheuser-Busch beer company to EACC Cincinnati; revealing behind the scene stories of the complex international M&A that created the world’s largest beer company.

Over the years, Filip hosted several EACC events delighting EACC members with a fascinating tour of Deceuninck windows and doors PVC extrusion operations, including its hurricane testing chambers.  One year, Filip even flew-in his brother, a Chef from Belgium, to delight participants with an over-the-top buffet.

Today, I join the EACC community in thanking Filip for his leadership and his commitment of the past 12 years to help build a premier transatlantic business organization. We wish him well in his new role as Board Chairman of Deceuninck North America.

Anne Cappel  is Chief Marketing Officer with EACC member company Altix Consulting. Prior to joining Altix, Anne served as Executive Director of the EACC of Greater Cincinnati through 2016.


By Joe Dehner
Filip Geeraert was an outstanding President of the European American Chamber of Commerce of Greater Cincinnati. It was no surprise to me, given Filip’s great success in leading Deceuninck North America’s growth in our region, as measured in people, innovation and numbers – and yes, in that order of priority. As the CEO of the Belgian-based company said, he led with a “strong, steady hand.” Filip did the same within the EACC – it was a helping hand, always ready to embrace, to welcome, to mentor, to guide. That’s leadership. We wish Filip well in his July 1 retirement and are happy to see he moves to a chairman position within this growing European/American enterprise.
Congratulations, Filip.

Joe Dehner is Counsel with EACC member firm Frost Brown Todd LLC. Joe is a founding member of the EACC, a past EACC Board Member and past Board President. 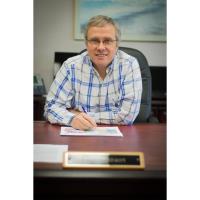