A Recap of the Lithuanian Ambassador’s Visit

Lithuanian Ambassador to the United States Rolandas Krisciunas visited Cincinnati May 23-25.  He was accompanied by Laura Serieniene, from the Embassy in Washington; Marijus Gudynas (Consul General) and Saulius Pumputis from the Lithuanian Consulate General in Chicago, and by Ingrida Bublys the Honorary Consul General from Cleveland.  The Ambassador said this was probably the largest official Lithuanian delegation to ever visit Cincinnati.  The visit even made it into the biggest newspaper in Lithuania!

He started with a visit to Good Samaritan Western Ridge, which (who knew?) is leading a program to teach Lithuanian medical professionals in emergency room management in what may become a model for the restructuring of the Lithuanian medical system.

Next on the schedule was a stop at Kroger, where CEO Rodney McMullen and Senior VP for New

Business Development Alex Tosolini greeted the Ambassador. They discussed not just the possibility of bringing Lithuanian food products into the Kroger family, but also Lithuania’s leadership in Shared Services such as legal, human resources, and finance (again, who knew that Lithuania had won numerous awards as the best location of outsourcing and shared services?).

The Ambassador spoke to EACC board members and other invited guests at a lunch we hosted at the Brown Dog Café in Blue Ash, and then paid a visit to the Cincinnati Eye Institute and the CTI Clinical Trial and Consulting’s new offices in Covington to talk about Lithuania’s leadership in medical research and testing.  He ended the day with a very interesting public speech at the University of Cincinnati (organized in conjunction with the Greater Cincinnati Council on World Affairs) where he talked extensively and frankly about the continued challenges of Russian expansionism.

A breakfast meeting on Wednesday, May 25 with Mike Cantwell and Jeff Groenke (senior staff from the offices of Representatives Chabot and Wenstrup, respectively) encompassed a frank and honest discussion of the future of transatlantic trade policy.  Next was a visit to GKN Aerospace where the Ambassador explained how RyanAir and other companies were relying on Lithuanian excellence in Aircraft Mainentance, Repair, and Overhaul (MRO) services to “keep ‘em flyin’” while containing costs.

The Ambassador met with the local board of the American Jewish Committee to talk about the ongoing work to recapture the deep Jewish heritage of Lithuania that was largely wiped out by the Holocaust (before WWII, nearly half of the population of Vilnius was Jewish; up to 95 percent of the countries Jewish population was wiped out under Nazi occupation).

Next came meetings at Procter & Gamble to talk about how the company is innovating its supply chains and where the Ambassador pointed out that Lithuania is literally at the geographic center of Europe (it’s true, you can look it up) making it a vital point for logistics operations.  The Ambassador described the ease of doing business in Lithuania in a meeting at Dinsmore & Shohl (as little as 3 days to establish a corporate presence). And he met with Rabbi Abie Ingber Executive Director of Xavier University’s Center for Interfaith Community Engagement before a sobering tour of the National Underground Railroad Freedom Center.

Before dashing off to the Airport for his Thursday morning flight, the Ambassador and his team paid a quick courtesy call on Cincinnati Vice Mayor David Mann where he recounted the warm welcome provided by the city and his thanks for the hard work of the EACC in organizing such an informative and profitable visit.

And the EACC also expresses, in turn, its gratitude to a number of people important to note that the EACC received a great deal of support in organizing this complex visit.  In no particular order: 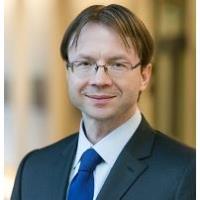