May 14, 2019
2019EACC News
By all accounts, the European American Chamber of Commerce of Greater Cincinnati (EACC) Annual Gala Dinner was a remarkable success! I hesitate to try and write a recap because there’s so much to say, but I’ll try to keep this brief.
We opened with a performance of the national anthems of the Netherlands and the United States by a string quartet from the Cincinnati Symphony Orchestra (CSO), followed by two important announcements by EACC Executive Director Todd Schwartz:
Jeff Thomas Catering provided a culinary delight, riffing on a traditional Indonesian Rijsttafel as a nod to the Netherlands' history in Asia.  Board President Yannick Schilly recounted some of our most important accomplishments in the past year and provided a vision for the future before presenting Joe Dehner the EACC’s Transatlantic Bridge Builder award in recognition of his long service to the EACC and to its members.
Dixon Miller from Presenting Sponsor Porter Wright then introduced His Excellency Henne Schuwer, Ambassador of the Kingdom of the Netherlands to the United States of America.  The Ambassador spoke eloquently about the deep ties that link the U.S. and the Netherlands – from their financing of the New Amsterdam colony (which became Manhattan) and our War of Independence and the Louisiana Purchase to our shared sacrifices in WWII – and contrasting that with the ambivalence and animosity the Netherlands and Europe senses toward NATO and the EU from the current administration.  "We need a boost again for the trans-Atlantic partnership and the European and American alliance,” he said.
Elizabeth Mangan, CEO of the Miller-Valentine Group (the evening’s Dessert Sponsor), thanked the Ambassador for his powerful presentation and invited guests to the patio at the Drees Pavillion for further networking and desserts (and to see the “Cincinnati” sign at the Duke Energy Convention Center decked out in the red, white and blue of the flag of the Netherlands).
The Ambassador and his delegation spent much of May 8th visiting Cincinnati to get a better sense of our region, including:
If you haven’t yet, be sure to visit our Facebook page to see photos from the event, and search for #EACCGala and/or review our timeline @EuropeCincy to see how the events unfolded.
Of course, we want to again thank all the sponsors who made the Gala possible, including:
Presenting Sponsor: Porter Wright Morris & Arthur LLP
Dessert Sponsor: Miller-Valentine Group
Gold Sponsors:
Silver Sponsors: Altix Consulting; Balluff, Inc.; Bannockburn Global Forex LLC & Frost Brown Todd LLC; CVG Airport, DHL Express (USA) Inc.; Eurostampa North America Inc.; HEULE Tool Corporation; HORAN; Luxottica; Perfetti Van Melle; Plante & Moran PLLC; PNC Bank; Safran Landing Systems Kentucky LLC; Thompson Hine LLP; U.S. Bank; VonLehman CPA & Advisory Firm; Wood Herron & Evans LLP.
We hope to see you at the 2020 EACC Annual Gala Dinner! 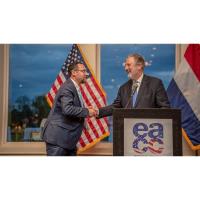